She's indefatigably, maximally devoted to her team. If there is a limit to her capacity for self-improvement, we have yet to see a sign of it. She will heal, repair, assess, fight, and even score if necessary. Parvati performs all her roles so dependably that she's been a staple of the Interplanetary Aristeia! Team Managers Association's All-Star team for twenty years straight, and still going strong. 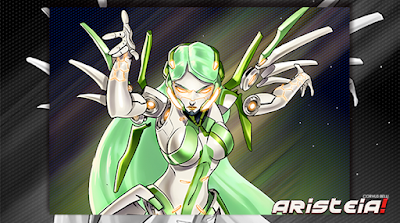 PARVATI: MADE FOR THE HEXADOME

Parvati is a permanent memento for the early days of Aristeia!, when only synthetic bodies were allowed to fight.

It’s been twenty-five years since the first Aristeia! cast. Back then, it was called Yajurveda, and was conceived as gladiatorial combat between Aspects of ALEPH—among them, our beloved Parvati—wearing otherworldly synth bods. The show had been running for four years when its first ever human contender rose to the top. The audience fell in love with her fierceness and physicality, so much so that the channel was emboldened to pivot towards meat-on-meat fighting and slowly phase the machines out.

Today, only Parvati remains as a vestige of those first runs, her claim to fame unchallenged. Parvati’s learning module was programmed by ALEPH with a focus on teamwork and field medicine, and with successive iterations she has become a veritable staple of the game. Naturally, Parvati is supremely effective at patching her teammates up in a rush, but what garnered her a spot among the all-time Bahadurs is her ability to do that while still scoring and taking out the competition. She’s known to be a second wind that can carry even the most disastrous game to victory. 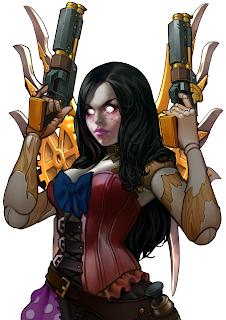 Each year, Parvati has regaled us with a specially-designed casing to suit that season’s overarching theme. Last season’s HexaDomes recreated the untamed mountains of Ariadna and Parvati flaunted the look of a rugged frontierswoman. This time she’s chosen retro stylings to take us back to her debut, updating that classic design but reminding her fans that deep down she’s a highly sophisticated android.

After so many years in the spotlight, Parvati is a bona fide international celebrity, recognized for her work both inside the HexaDome and outside. With her learning module always collating and processing every game and every fight, only one question remains:

Is there a ceiling to Parvati’s evolution? 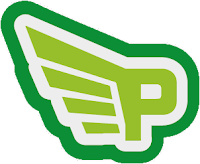 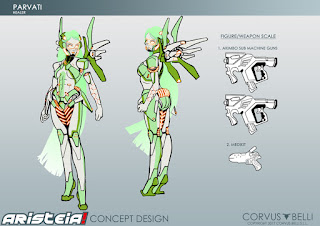 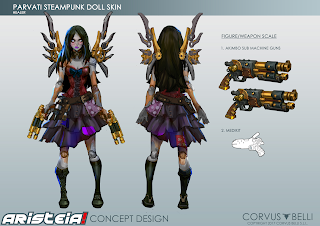 Parvati is another of the original "Core 8" Aristos from the starter. As such she has both a basic plastic and a limited edition metal standard model. The plastic standard model suffers, as do most of the original starter plastics, from a lack of crisp detail, although in the case of Parvati the artificial nature of the character helps with this and the model is one of the better examples of the Core plastics. This issue is entirely resolved on the metal model, which is an outstanding sculpt, and if you love the original Parvati and want to use her a lot I highly encourage you to seek out a copy of this limited edition version of the model.

Parvati has also had a Skin released and which is available for purchase. This is the "Parvati Victorian Automata" and is up to the usual high standard of Corvus Belli metal miniatures. If you like the Steampunk flavour of the sculpt then you will likely be very happy with this skin as it's a high quality miniature. 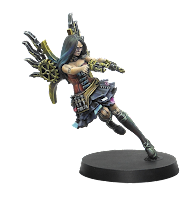 While a good painter will be able to make great work of any of the options, I would suggest the
metal sculpts for less experienced miniature painters as they will give better results without the need for more advanced techniques and good free hand work. 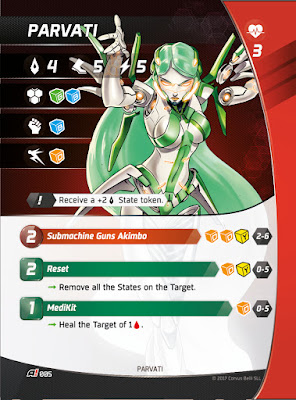 In terms of her overall attributes Parvati is fairly average, except in terms of her Speed. The other standout is her solid Defense, which makes for a Support who is more difficult for opponents to neutralise than would usually be expected.

Firing off of Special results her native Switch seems excellent at first glance, but due to the fact that she will most often fire it during her own turn it's rare for Parvati to gain the full benefit of +2 Initiative, instead having to settle mostly for +1. Of course if you get an opportunity to fire it out of her Activation it's a nice bonus.

Many Managers will glance at her Attack "Submachine Guns Akimbo" and write it off as a Damage dealer based on nothing more than the lack of a Red die. This is absolutely a mistake. Not only is the actual damage output of an Orange die not much less than a Red, making the dice for the attack solid on that front, but with good range and the very reasonable Energy cost of 2 it actually ends up being an option with excellent output. 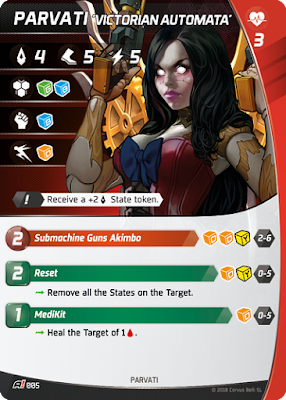 In terms of Range it's also important to note that both of Parvati's Actions have 0-5 Black, which means that while she does require Line of Sight she can use them on herself. This restriction means that Parvati will be a frontline Support character more than a true backline skulker, as suits her higher than average combat output, toughness and speed.

Two Energy to Remove ALL States from a Target with solid range and a good chance to fire makes "Reset" the gold standard in Abilities of its type. More so than for her healing it is this Ability which defines Parvati as a Support character and makes her most worth selecting. In a meta where opponents can stack States on themselves for offensive use, and where positive buffing states like Focus exist, this Ability only continues to grow in importance. 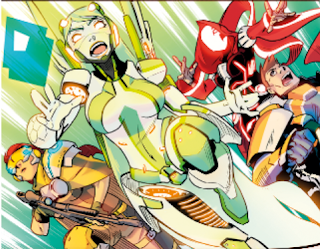 On the other hand "MediKit" isn't actually all that strong a healing ability, although the low Energy cost and reasonable chance of firing do work in its favour. This is a nice bonus to throw out with a last point of Energy most of the time, however, rather than a major focus of the Aristo and makes her better for supporting Strikers who want a little top up in terms of Hit Points rather than really battered Tanks. 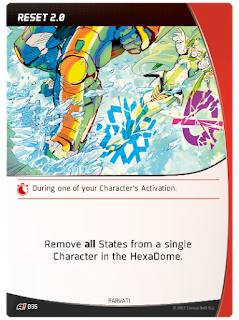 As befits her nature as an Aristo Parvati is the perfect example of "Generosity" with her Tactics. Every single one of them can be played by any Aristo in your Team, making her a brilliant Team player on yet another level!

The first example of this is "Reset 2.0" which seems slightly redundant when you keep Parvati's own "Reset" Ability in mind. However there will be times when you will want to activate another Aristo earlier in the Running Order but still want to have them cleared of their States.

As more and more States come into the game, and with more and more Aristos deploying them, sometimes from out of Line of Sight and often without any opportunity for an Opposed Roll the opportunity to clear them from anywhere on the table and at any moment you select regardless of who is Activating at the time can be invlauable. 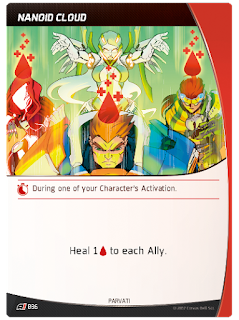 On the theme of "anywhere in the Hexadome and at any time" we also have "Nanoid Cloud" which also offers a significantly improved version, hitting your whole Team. If there are ever Minions with more than one Hit Point introduced then Tactics like this will rise even further in their value, but for the moment it's functionally capped at healing 4 Hit Points.

This, obviously, has higher situational value in those moments where you have had opponents spread damage across several of your Team. It's going to be especially useful when you have Aristos who can spread damage between them through their Abilities.  Given the comparatively lower rate of healing which Parvati provides in comparison to other Support Aristos this can be a valuable additional layer of healing to bolster that aspect. 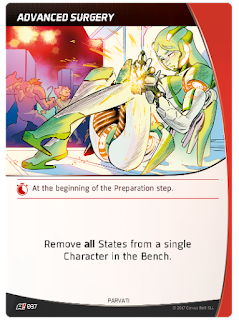 While the first two options certainly offer valid choices which can, under the right circumstances, excellent Tactics to shift the balance of the match, our next is probably much more likely to attract a "NO!" on account of offering a turn winning advantage. This is "Advanced Surgery", and while it might at first glance function as a slightly more time limited version of "Reset 2.0" the opportunity to clear the -2 Energy State before an Aristo generates their Energy for their Activation makes this a game changer.

Eliminating the core cost of taking a trip to the Infirmary (especially for an Aristo who had already had their Activation prior to getting put down) Advanced Surgery can be especially useful in rewarding aggressive play by Strikers to put down opposing Aristos when making Defense rolls, because a "Double Frag" doesn't hurt you if you won't be penalised on your return. It can even help bounce into a better position. 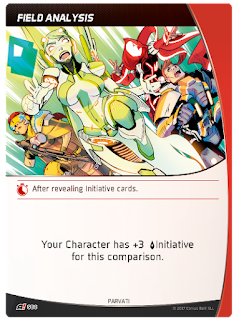 Another potentially game turning Tactic is the excellent "Field Analysis". While an Initiative bonus might not seem like a huge effect, this Tactic offers a large enough boost to allow even lackluster Tanks and laggard Support to act before the Strikers and Scorers who usually make the choice in Activation order.

You have no risk of messing up or missing out, because the timing on the Tactic is very forgiving, waiting 'till you know exactly what you are up against before committing. So if even +3 Initiative won't give you the choice in Activation Order then you simply don't have to play the card.

Getting the Jump on opponents, or forcing them to act first and giving you the chance to counter, especially when the opposing Manager expected things to go the other way for that Activation, can give a critical edge. 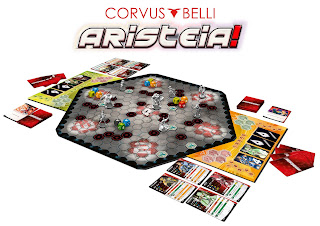 In terms of her Scenario synergy Parvati rewards the Manager who picks her for any match where mobility is at a premium thanks to her Speed and good Range. At the same time her Defense and Damage output is good enough to make her a solid pick for more combat oriented matches, and her healing certainly also contributes in those situations. 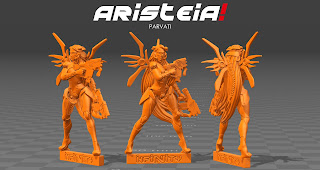 While specific team synergies might mean that other Support Aristos are more effective than Parvati in a particular mix, it's hard to think of a Team or Scenario where she won't be, at least, good. She's one of the best examples of a starting pick for your Team, who you might replace because another Aristo is going to be better in a particular way which will be effective with your other selections, but who offers enough to justify her place any time that there isn't a specifically better option.

So, that's our creation of Vissiorama, the last of the Aspect Aristos, the awesome all-rounder Parvati! 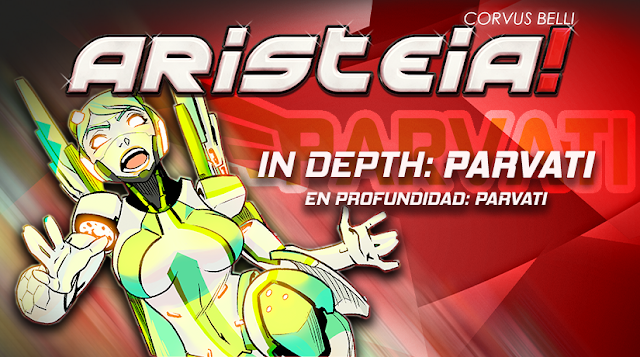 If you are looking for more on Parvati, check out the official writeup here:

And, as always, we'd appreciate your thoughts. Not just on this article but on the series as a whole as well. Are these articles suiting what you want from Aristeia! content?  Is there something more you'd like to see from them?

But, also, do you use Parvati?
What kind of team do you like to run her in?
Has she been effective for you?
What limitations have you run into?

Your thoughts and feedback are always appreciated.
Posted by Admiral JCJF at 20:07

Archive of the Heart

Friends of the Hyperpower